Tomorrow, March 21st, will be my 23rd birthday. Though the number is not one that usually holds much significance, my 23rd years has probably been one of my most eventful ones to date. More changes, challenges, adventures and accomplishments have filled 23 than I could have ever imagined. I started flipping through my calendar from the past 12 months and here are a few memorable moments I came across. It isn’t a complete list, simply a sampling of all the amazing things that have blessed my latest year of life.

April 2012: Completion of my Bachelors Degree

Only a few weeks after turning 22 my last day of school arrived. It was four years full of a significant amount of blood, sweat and tears and I was so happy to be finished. While others were scared of what lay ahead I was actually really excited. Already I had landed my first post-degree teaching job as an EXPRESS DANCE teacher with Kaeja d’Dance and I was also still completing an administration internship with the company. We were in full swing preparing for a fundraising event and summer festival. I was too busy to really even notice that my school days were coming to a close.

I spent six amazing days with my absolute favourite professor, Donna Krasnow, becoming certified in her conditioning program which was specifically designed for dancers. I have taken part in a fair number of workshops and courses this year, but this one was by far one of my favourites. I had been using the system for years anyways, so getting to see how to properly teach it to others was very instrumental in me developing my own method of staying in shape now that my formal training was complete. 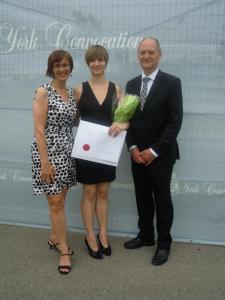 Convocation was momentous more because my parents came to visit than because of the actual ceremony. By June I already had so many things going on that the ceremony felt a little like an afterthought. I was still very proud to receive the actual piece of paper though and loved getting to spend a week with my family. We spent tons of time touring Toronto, seeing shows, eating at great restaurants and doing LOTS of shopping. It was nice to get to spend some time showing my parents what my life was like since moving away and sharing with them some of the things I really love about the city I live in.

I had been involved in the Fringe Festival in past years as an audience member and a performer, but this year I had a slightly different perspective. I was reviewing for the online publication Mooney on Theatre. Not only did I get to see tons more shows than usual, but this two week gig led to me becoming the dance contributor for the publication. I now get to see tons of amazing dance shows all year long as well as get to share these experiences with my friends.

Probably one of the most memorable experiences of the past twelve months for me. This program runs in tandem with the SummerWorks Performance Festival. For twelve days myself and eleven other emerging performance artist met with prominent members of the Toronto Theatre community to discuss every imaginable aspect of the business of the performing arts. We then spent our evenings traipsing around downtown seeing shows and just having an absolute blast. As a dance artist who loves working with people in different disciplines it was an eye opening education. The people I met though are probably the absolute best part of what I got out of SLIP. The friendships and connections I made are invaluable to me and have led me to so many amazing opportunities.

September 2012: Welcome To the Neighbourhood Installation

For the first few weeks of September I collaborated with Sochi Fried, Cathy Gordon, and Sean Robertson-Palmer to create an interactive installation piece as part of Theatre Passe Muraille’s street festival in honour of their 2012/2013 season launch. Over two weeks we collected video footage and stories from people in the surrounding neighbourhood and compiled them into a film work. We then invited festival attendees to add to the piece by covering the lobby walls with their own stories about what neighbourhood meant to them. This was the first time I had done work which was so community dependent and interactive in its presentation. I really had to push myself beyond my own fears and was so grateful to get to work with the other wonderful artists involved in the project.

October 2012: Traveling to Argentina and Mexico

This trip was probably the biggest undertaking of 2012 for me. I had been itching to travel for a good year, but with school and all my summer plans I hadn’t been able to make it happen. I had a friend though that was living in Argentina at the time and a family friend that wanted my mother and I to join her in Mexico for her 40th birthday. It seemed too perfect an opportunity not to take. I spent a few weeks in Buenos Aries and then met two of my favourite ladies in Puerto Vallarta for a week. I absolutely fell in love with Argentina and really want to go back again to explore more. It was my first time in South America and I will definitely be going there again. Probably one of the most memorable events was getting to build homes for families who live in the slums of the country. Really puts in perspective what it truly means to go without. Lying on a warm beach for a week wasn’t too bad either. 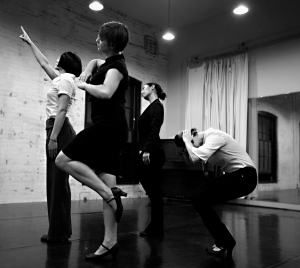 Only two weeks after returning from my travels I jumped on stage to perform in Karissa Fyrrar’s piece Contents May Have Shifted (Stasis) as part of Dance Matters Series 1: A Woman’s Work. It had been a while since I had been able to perform in this kind of context and it was also my first significant dance performance since being out of school. I had done smaller performances over the year but nothing part of a series that is so well attended. It was great to get to perform again, and to also realize just how many people I was getting to know within the Toronto dance community.

2012 was the first year I wasn’t able to make it home for Christmas. My father’s birthday is also a few days before Christmas so it was two events I was going to be missing for the first time. My mother and I pooled our resources and surprised him with a trip to see me a for a few days. It was the first time in a long time that we have gotten to spend an extended amount of time together just the two of us. It was really great to get those few days with him over the holidays and to get to celebrate his birthday together.

Though in the previous months I had been doing a variety of administrative jobs I hadn’t been doing much video work for a while. I took an internship editing video footage for CDA and in the process remembered why I love dance film work so much. Along with being a great opportunity to find out more about another prominent Canadian dance organization it also got me interested again in doing some new dance film projects of my own.

February was the month of planning. I started created a work for 60×60 Dance Toronto, shot a new dance film and began orchestrating a creative collective. The best part was that all of these projects meant I got to work more closely with some of my favourite people. It was exciting to really start to get the ball rolling on so much new material.

I have not been back to my hometown of Victoria, BC for over a year and haven’t had a birthday at home since I was 18. After a very busy beginning of the month I am greatly enjoying relaxing with family and enjoying the ocean air. Can’t think of a more perfect way to celebrate this crazy busy 23rd year, than with a week of relaxation.

Find What You’re Looking For