I have officially made it to the half way point of my Gratefulness Challenge! I have spoken about so many things over the past fifteen days and there is still so much left to say. I think the best part so far is realizing just how much I have to be grateful for. It is also neat how the moment you put even the smallest bit of energy into thinking about something you suddenly start looking at things in an entirely new light without meaning to. The power of positive thinking at its finest.

1. Athletic Edge Sports Medicine: I have been going to AESM for over two years now and I absolutely love the place. Founder Dr. Grant Lum is a phenomenal sports and performing arts medicine doctor and his team of physiotherapists, chiropractors, massage therapists, osteopaths, acupuncturists, sports psychologists, dieticians and trainers are all top notch. Walking in to their clinic is always so soothing.

I was originally referred AESM by my all time favourite professor, Donna Krasnow, who is a friend of Grant’s. Dancers tend to be very skeptical of doctors because our two fields don’t have a very strong working relationship. There is a lack of understanding on both sides of what exactly the other does and how to best work together to achieve optimal health. From the moment I met Grant though I felt at ease. He immediately sent me for tests to rule out the worst case scenarios and had an action plan in place of how to move forward. The most important part though was that everything he presented me was given as an option. Never did he speak down to me or make me feel like there was only one course of action I could take. He was willing to sit and explain the benefits and risks of every possible treatment choice with me before allowing me to make a decision for myself. Once I came to a decision he then referred me to a practitioner in his clinic who he thought would be best suited for my specific injury and history.

The best part of the entire AESM team though is that they understand that you can’t just stop living your life because you are injured. A lot of doctors will tell dancers that they need to fully stop dancing. Along with now being proven as a bad course of treatment it’s also not very practical. Not only is dancing how a dancer makes a living but it is also very strongly linked to their physical and emotional well being. If you want them to stop dancing you might as well ask them to stop living. Everyone I have seen at AESM has understood that fully stopping dancing for months at a time just wasn’t an option and their treatment plans always tried to get me fully functional as quickly as possible without me having to stop being active. If they could get me healed quickly through the least invasive methods possible they had achieved their goal

And they also never gave up! My foot injury took a good year and a half before it was finally 100% better. I went through pretty much every treatment option available before it finally healed. No matter how frustrating it got though they were always optimistic, supportive and creative in trying to find solutions.

I think what makes AESM so unique is that everyone working there truly believes in the values which Grant founded the company under. AESM’s doctor’s work as a team to get you and keep you in the best shape possible. They see their clients as more than injuries, but as a real human beings and therefore take care of you with your entire self in mind. The reality of what I do is that injury is a part of the job. Knowing that when I do get injured I have somewhere I trust to turn to makes the scariness of my career’s injury statistics a lot easier to swallow.

2. Optimism: Maybe you scoff at those that constantly see the glass as being half full, but they’ve actually got the right idea. Seeing the light at the end of the tunnel keeps you moving forward instead of staying in the, sometimes shitty, present. In a TED talk from last year Tali Sharot actually talks about just that: the pros and cons of being optimistic. In her talk entitled The optimism bias Sharot explains her research which supports that our brains are actually programmed to be slightly optimistic. In her study she found that people with the most realistic outlooks on life where actually the people that identified as suffering from depression.

Now I don’t think what she is trying to say is that we should that we should avoid being practical and instead constantly see the world through rose tinted glasses, but a pinkish hue could definitely come in handy.  I would identify myself as a fairly realistic person. I like facts and statistics and proof, but I also take all that information and try and see the good. Yeah, maybe today is bad, but you know what that means? That tomorrow has to be better! I believe it is optimism that keeps our society going. There is so much terrible stuff going on in this world. If we had no hope that we could make it better, then we might as well just give up right now. Optimism is like the fire behind innovation, creativity, and hard work. It is a belief that there is something good to be found in every situation and, more importantly that there is even more good to be created in the future. 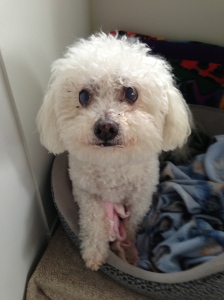 3. Max: Max is the name our my family’s furriest member who passed away yesterday at the age of 15. He was my seventh birthday present and was one of the happiest little dogs I have ever met. My mom convinced our landlord at the time that we could have a dog in the house by saying that she felt she needed a guard dog while my dad was going to be out of town for a few months. Max probably would have just wagged his tail and liked the burglar’s hand but he was very good at convincing future landlords to let him move in due to his goofy, yet charming disposition.

I remember when we first got Max I really wanted him to sleep in bed with me. This never really worked as I ha hoped because the moment I fell asleep I would thrash around so much that I would unknowingly kick him right onto the floor. He quickly gave up on me and took comfort between my parents, but whenever I had a bad day or was sick you could find him glued to my side offering comfort.

No one could ever guess how old Max was. They always thought he was a puppy. He was just so happy all the time that it was hard to tell he was older. He never acted his age and that was one of the best things about him. A true young soul.

I think what is so wonderful about pets is that they provide unconditional love to everyone. Max fully embodied that quality and brought a smile to the face of everyone that met him. He was such a wonderful part of our family and we are glad to have gotten to share the past 15 years with him.

One thought on “Gratefulness Challenge Day 15”

Find What You’re Looking For